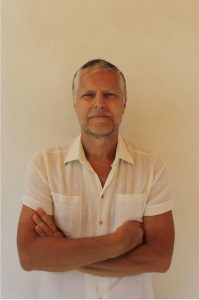 Riccardo Riccardi was born in 1954 in Rimini where he studied piano with Guido Zangheri. He attended High School at the Liceo Classico Giulio Cesare. His Italian teacher was Carlo Alberto Balducci, who had also been the teacher of Federico Fellini. In 1972 he moved to Florence to study composition at the Cherubini Conservatory of Music, initially with Pier Luigi Zangelmi and then with Carlo Prosperi. He concurrently studied piano with Franco Scala privately until graduating in 1976 at the Cherubini Conservatory. From 1977 to 1980 he spent his summers in Germany and, in 1980, worked as music coach at the Youth Festival Meeting in Bayreuth. In 1981 he earned his Doctorate in Architecture with a dissertation entitled “Theories of Harmonic Proportions in the Architectural Treatises of the Renaissance”. He earned his degree in composition in July 1982 and moved to Los Angeles that August.

Activity as a composer

From the first work in his catalog in 1973 until the early 1990’s, Riccardo Riccardi almost exclusively composed instrumental music in a late expressionistic style, the style in which he was educated. In the early 1980’s, with Ad libitum for piano, he turned toward the language he would increasingly develop in the following years: an emancipation of rhythm against a strongly melodic design. Ad libitum was the inspiration for a series of piano pieces revised in 1988 for an event dedicated solely to Riccardi’s piano music at the Centro de Arte Reina Sofia en Madrid.

Riccardi first approached musical theater in 1991 and 1992 with his ballet, Il brutto anatroccolo and with his scenic cantata for solos, chorus, and orchestra, La meraviglia e il dubbio. The sung word became central to his creative activity. At the same time he began his song cycle, Canti da Pessoa, for voices and instruments—a project that involved him for more than a decade. These songs, with text fragments drawn from the great Portuguese poet, are newly envisioned in Italian and represent the most rarefied stage of Riccardi’s production.

In 1996 for Arcosanti, an utopian city built in the Arizona desert, Riccardi wrote L’avvenimento for piano and narrator, on fragments taken from Rainer Maria Rilke and Vincent Van Gogh. In 1997 he expanded this pianistic poem into his chamber opera, L’avvenimento, a work in which he, for the first time, created his own libretto (albeit under the pseudonym, Filippo Candiani).

In 2004, for the Peabody Conservatory in Baltimore, Riccardi composed The Man Who Loved Islands for narrators and piano, a work that evolved in 2006 into  L’uomo che amava le isole – Racconto-Opera, for actor, soprano and orchestra. In both versions the libretto was written by the composer and based on a story by D.H. Lawrence. Immediately afterward, he completed a libretto begun in 1998, Il ritorno di Casanova, from Arthur Schnitzler’s novel, Casanovas Heimfahrt, and then began composing the music for it. The opera Odisseo dates from 2008.  It’s a psychological drama inspired by the characters of Homer’s Odyssey but with the original outcome changed.

In 2009, under commission from Opera Bazar, Riccardi wrote, Talk Show. The libretto was inspired by two Rainer Maria Rilke’s Totentänze, adapted to the present-day. In 2010 Riccardi wrote two more operas: the first, F.S.S.P.A., based on his own libretto, is set in a modern train station. The second, Una questione d’onore, is based on Leutnant Gustl by Arthur Schnitzler and is set in Baroque Venice.  In 2011 he worked on a cycle of 22 songs entitled, Não sou nada.  Again the material is taken from Fernando Pessoa but this time retains the original text and the Portuguese language.

In 2012  Riccardi wrote a satyrical opera, Shakespeare & Gossip, drawn from the novel, Caprice, by Ronald Firbank, and in 2013, Il testamento (The Will), a theatrical play with musical arias, written for the Royal Irish Academy of Music in Dublin. In 2014 he prepared a chamber revision of his Concerto for Piano and Orchestra for the Ferenc Liszt Academy in Budapest, and, after almost twenty years, dedicated himself again to a cycle of solo piano pieces, Diario 2014. In 2015 for the Krakow Music Academy, Riccardi wrote an orchestral suite, Shakespeare & Gossip Suite, drawn from the opera of the same title, and for the Teatro sperimentale of Spoleto composed Contesa seconda for chamber ensemble.

In 2016 Riccardi received a request from the Italian Embassy in Washington D.C to compose a chamber theater work for the celebration of the Italian “Festa della musica” at the Embassy. Moving-out resulted, a play with arias and duets, whose action takes place inside a New York apartment. In the same year he revised and completed the instrumentation of his opera Shakespeare & Gossip for the Anno per Anno Festival, in the Palazzo Braschi, Rome.

Presently he is working on two new projects: 1) he continues with the composition of Il Direttore, an opera, sung throughout, first drafted in 2012 and, 2) with the libretto already finished, is composing the music for L’ascensore, an opera conceived for closing his cycle Il trittico della banalità (TheTtriptych of Triviality) whose first two dramas are Talk Show, set in a TV studio and F.S.S.P.A. set in a train station.

Riccardo Riccardi holds a Chair of Composition at the Santa Cecilia Conservatory of Music in Rome since 2012. Before that, he was on the faculty of the Luigi Cherubini Conservatory of Music in Florence from 1988 to 2012. He has also served as Professor of Composition in the Florence Program of New York University from 2008 to 2012, as Professor of Music Appreciation at Saint Mary’s College (Notre Dame, Indiana) in their Rome Program from 1998 to 2013. He taught also summer courses in the History of Italian Music, Opera Literature, and Opera Workshop for the University Studies Abroad Consortium of Tuscia University in Viterbo from 2011 to 2014.

1980 He was one of the circle of the winners of the Rassegna Internazionale della Filarmonica Umbra, with his Quartetto per sette strumenti a fiato.

1983 He received the Composer’s Award at the 21st Southwestern Youth Music Festival with his Concerto for Violin and Orchestra.

1987 He was awarded “honorable mention” at the Premio Città di Castelfidardo with his Concerto for Accordion and Orchestra.

1995 He was chosen by the California State University as Italian liaison for the project: Exploration of Musical Traditions – A Program of Cultural Cooperation between the United States and Italy.

2009 He received a Grant from the Center for Academic Innovation – Indiana for his opera Talk Show.

2014 He was the Nancy Unobskey Visiting Artist in Modern and Contemporary Art at the Goucher College, Towson – Maryland.