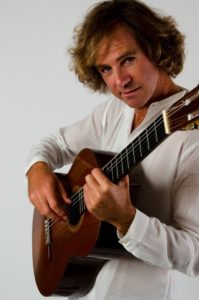 Guitarist and composer, Leonardo De Angelis is internationally recognized as one of the most interesting concert performer representing the passage and the integration between the instrumental guitar tradition and the new contemporary languages.

Born in Rome in 1962, he started playing guitar with his father since he was young.

His first debut was at the age of thirteen at Castel Sant’Angelo in Rome till the graduation with the highest honours at the Conservatory.

He won the International contest “Pittaluga” of Alessandria in 1981. The prize led him to become the youngest winner among all the editions.

Leonardo De Angelis has studied with the greatest guitarist masters of the twentieth century: Alirio Diaz and Andres Segovia.

Andres Segovia acknowledged him as “the Musical temperament always agree with the art major needs”.

From 1989, he constantly collaborated with Leo Brouwer the greatest living guitarist composer.

Leo Brouwer dedicated to him in 1999 his greatest composition “Concerto Cantata” for guitar, choir and orchestra.

– has recorded for RAI of Rome, Radio France of Paris, BBC of London, ORT of Vienna, etc.

– has recorded CDs for Quadrivium, Decca and Universal.

“its depth musicality is expressed with disruptive force without ever losing grace and elegance”;

“A precious and rigorous artist, sure of his art”

– Guitar Teacher at the Santa Cecilia Music Conservatory of Rome;

– Teacher of String instruments Organology at the University of Ferrara (1995/1996).

– Consultant for the Assisi, Rieti, Sermoneta and Pistoia Guitar Festivals.

– Art Director of the “Guitar Itinerary” for the Teatro dell’Angelo in Rome.

In his recent activity as a composer, he performed at Segovia Festival of Madrid, at Algerian Radio of Algeri and at the Barok Saal of Vienna.